But while the move was welcomed with singing and dancing in the capital, some protesters remained sceptical and reiterated their demands for the complete overhaul of the country’s political system.

Friday’s announcement came a day after more than 50 protesters were killed by security forces in Baghdad and Iraq’s mainly-Shia southern cities of Nasiriya and Najaf.

Thursday was described as the “bloodiest day” since the anti-government demonstrations began in early October, bringing the reported death toll to at least 400 people.

The statement by Abdul Mahdi, who took office a little over a year ago, came shortly after Iraq’s top Shia leader, Ayatollah Ali al-Sistani, condemned the use of lethal force against protesters and called for a new government.

Quoting al-Sistani’s speech, which was delivered to worshippers at Friday prayers in the holy city of Karbala by his representative, Abdel Mahdi said he would present his resignation to parliament so legislators could select a new government – an announcement that was welcomed by protesters.

“The premier’s offer to resign is a great first step and we’re extremely elated to receive this news,” Mustafa, 24, told Al Jazeera as he celebrated among the crowds in Tahrir Square, the hub of the protests in Baghdad.

“Even if we paid a heavy price to get here, it means that the protesters managed to pressure the government to address our demands. It means our sacrifices were worth it.”

Another protester, 30-year-old Noor, ruled out calling off the protesting, adding that the resignation was “just the first step”.

“But this the happiest we’ve felt in a long time,” she told Al Jazeera while waving an Iraqi flag with her friends in Tahrir Square. “We’re celebrating this victory after sacrificing blood and tears for the sake of this moment.”

Others, however, stressed that a simple change of leadership would not suffice.

“This step is not enough for most of Iraqis, especially after so many people have died,” Zainab, 29, told Al Jazeera. 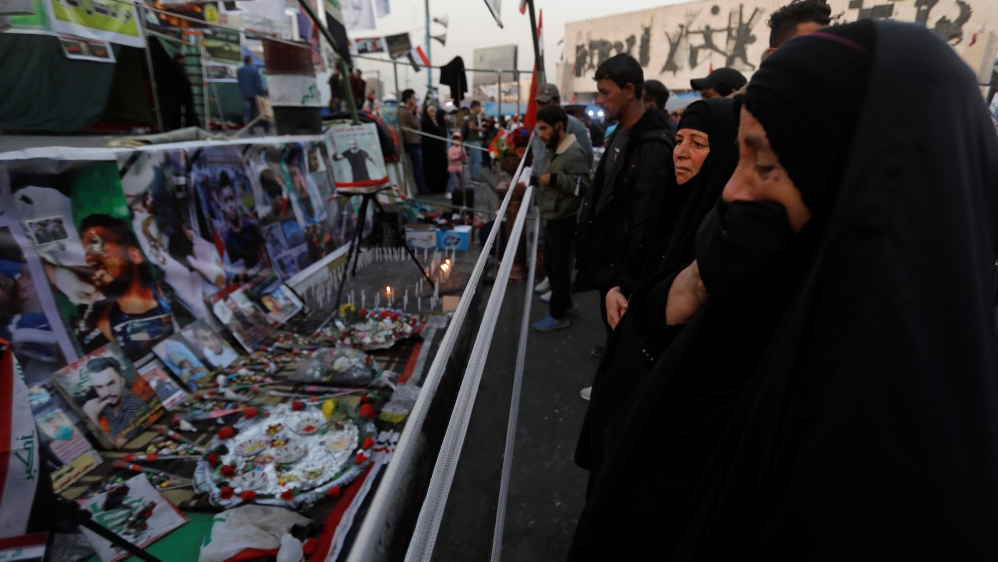 An Iraqi woman reacts as she looks at a makeshift memorial with personal belongings of those who were killed in anti-government protests at Tahrir Square in Baghdad [File: Khalid al-Mousily/Reuters]

Driven by anger over corruption, high unemployment and inadequate public services, protesters in Baghdad and several southern cities have been taking to the streets since early October 1, protesting against the country’s ruling class and calling for the overhaul of a quota-based system established after the 2003 US-led invasion.

For many, this quota-based system over the years allowed certain individuals and groups to enrich themselves and expand their influence – all the while much of the oil-rich country’s population continued to endure severe economic hardship and poor public services.

“We don’t blame Abdul Mahdi for everything. He’s just the face of a body that so many others are hiding behind – militias, political parties and politicians that belong to Iran,” Zainab said.

“Even if Abdul Mahdi is gone, they will replace him with someone else. So we will celebrate when the parliament is dissolved and free and fair elections are held under the United Nations’ supervision.”

Iraqi political analyst Ihsan al-Shimmari told Al Jazeera that the parliament is expected to accept Abdul Mahdi’s resignation after several political groups and the top Shia authority called on him to step down.

“The political groups will likely accept his resignation right away and start to negotiate and discuss who they will put in his place,” al-Shimmari said.

“Whether it’s the Marjia [Shia authority] or the biggest political parties and blocs, everyone has made it clear that Abdul Mahdi needs to step down,” he added.

According to Article 81 of the Iraqi constitution, the president is expected to “charge another nominee to form the Council of Ministers within a period not to exceed 15 days”.

Abdul Mahdi, 77, took the job just over a year ago after inconclusive elections produced weeks of political deadlock.

“He was chosen by a group of political parties that make up the Iraqi government. They chose him because he was a compromise candidate who would give in to their demands as they looked to extend their political and economic power,” Renad Mansour, head of the Iraq Initiative at Chatham House, told Al Jazeera

“The protests were about removing a whole system. With the system and political parties still in place, it’s hard to see the protesters satisfied simply by the removal of a prime minister they considered a symptom of a bigger problem.”