Employer invites six candidates to a 7am interview but doesn’t show up until 6pm to test their patience – so, would YOU wait?

By Latoya Gayle For Mailonline

An employer hoping to test the patience of prospective staff has been slammed, for making candidates wait almost 12 hours.

Jerry Doubles, from Nigeria, took to Twitter to reveal a tale he’d heard about six job seekers being asked to attend a job interview at 7am, only to be left waiting all day.

Two of them stayed until the interviewer finally arrived at 6pm, and were rewarded with jobs for passing his test of patience.

Some commenters said it was wrong of the employer to waste candidates’ time, but one woman confessed she had succeeded in getting a job that had the same process in the past. 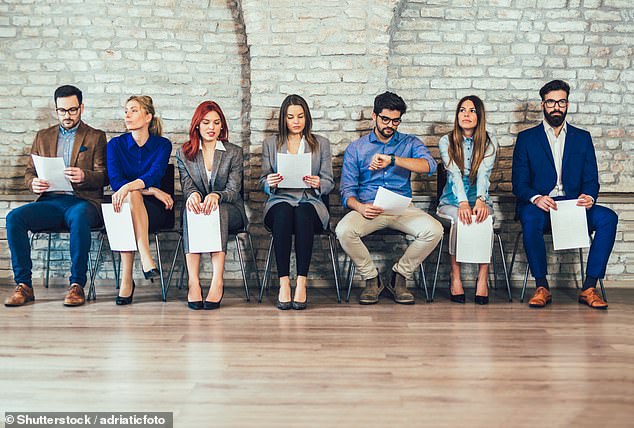 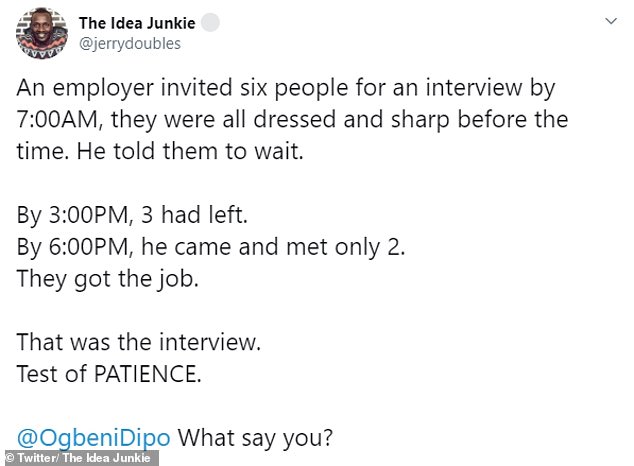 Jerry Doubles from Nigeria, shared on Twitter how an employer made a group of six job seekers wait 11 hours for an interview 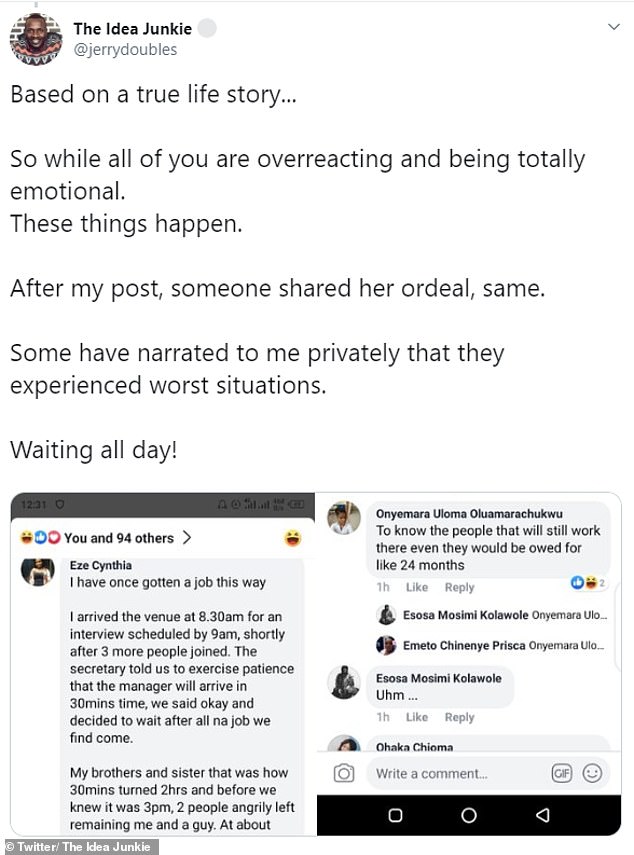 Explaining the scenario, Jerry wrote: ‘An employer invited six people for an interview at 7:00am, they were all dressed and sharp before the time. He told them to wait.

‘That was the interview. Test of PATIENCE.’

Blasting the employer, one person responded: ‘This is insulting on so many levels, including wasting people’s time. They had to wait ten plus hours, all the while paying for parking and/or babysitting, skipping lunch, etc. It’s rude and not a company I would want to work for.’

Another added: ‘Any employer who pulls a stunt like this is one you don’t want to work with. They will continue to play insane mind games with you for the entirety of your employment.

‘Some people can’t afford to be picky and they know this. Why do people think mistreating your employees is okay?’

A third said: ‘I have witnessed such. The employer just employed the two worst out of the six. Patience is not a criteria for interview. Someone that is lucrative won’t waste a whole day chasing shadows. Hardworking men make plans, desperate men sit and watch.’

Others argued making candidates wait for extensive periods reveals to the employer who can be exploited.

‘Obedience maybe… not patience. 11 hours to wait for an interview that doesn’t guarantee you a job? Not having a life outside of work/school, and letting it be all consuming is not a healthy lifestyle,’ wrote one.

Another said: ‘A clever way of filtering out applicants with kids, or any other responsibilities beyond slaving for a living’

‘Leave your child at school and don’t feed them. Miss your dentist appointment. Your mother can wait longer in the hospital. A small business psycho wants to flex his tiny d*** by making you wait all day in a lobby. They’re testing desperation. Desperate workers are the most EXPLOITABLE,’ added a third.